Posted on September 8, 2015 by runsailwrite

I am a bit dumbfounded by Ithaka, Odeseus’s home island (?), if this is in fact the actual island, not the western half of Cephalonia, as Cephalonia claims. Even if the tale was fiction, it was written 800 BC is about the king of this island who went to fight in the Trojan war and pulled a sailor’s bender for 10 years before he got home. (I would have had a good story to tell my wife too, if it took me 10 years to get back from a 1 month voyage.) Today what remains is a few taverns, a ferry dock, lots of small houses and fishing boats. It is stunningly beautiful, but how is it that this is one of the birthplaces of civilization? It apparently moved off eons ago. Today, there are people sitting in taverns- men mostly, sitting in cafes, smoking and drinking coffee, then beer, then ouzo? It really is too hot to endure much else, so how was anyone ever able? I guess it hasn’t always been July.

On the way here from somewhere else, it was hot. Very hot. We passed a beach bar and voted to throw out the anchor and swim to shore for a cold beer.

I was first in the water with my waterproof camera- thanks, Gary!. It was a private camp that only served a tour boat that had already been by and eaten all the food and drank all the beer. sigh. I was swimming back before the captain, Mauro could even make it to shore. 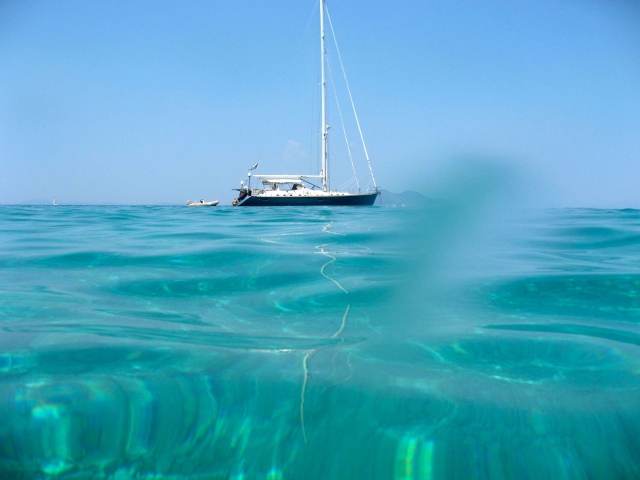 So I swam back. But look at this water! It was a good swim, and I had beer in the fridge.

1 Response to Ithaka- home of Odysseus