Posted on November 3, 2014 by runsailwrite

Amante (really, her crew) is rather famous for having no plan. Why plan when weather, unforeseen potential buyers, weather, cheese festivals, weather, wine festivals, weather, jazz festivals, weather, a friend we met last week happens to be in Italy and wants to come sailing, weather or weather ultimately decides for us what we will do. Just to prove that we do actually try to plan, but often fail for the aforementioned reasons, here is: 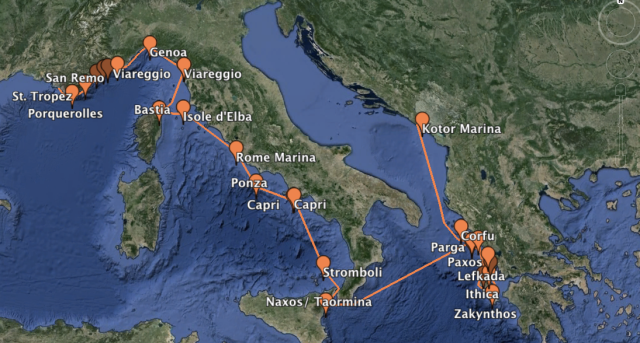 We tackled this in two halves, and since Matt and his Fiancé Emma wanted to join us at a particular time and a particular place, we hauled boat to make it happen. No one but offspring gets this consideration. So the actual route occurred in two halves. This first part we did before attending and Matt and Emma’s engagement party in Wetherby, England, then coming back to Tahoe for July- August. This part was a LOT of navigating, too much for my taste. This included three overnight passages, which wear me out! 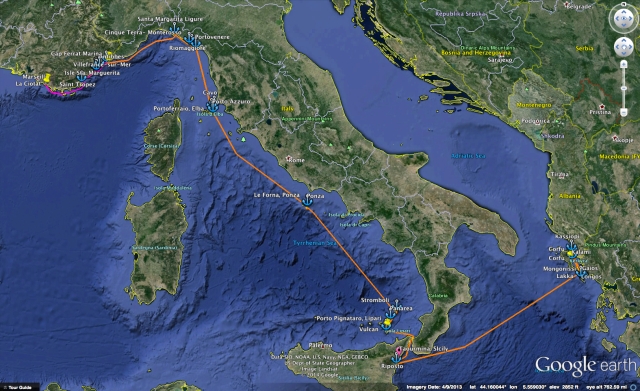 The second half of the season was far more civilized. It was also fall, which means the crowds were gone and the weather was more settled than in spring, but just a bit. We spent a full month moving slowly through Croatia thoroughly enjoyed it. How did we pick our locations? Our famous sailing idol couple, the Berkeleys on Berkeley East, left notes on where they have been. I plugged them into Google Earth and violá, a plan. We didn’t get to as many places or take equally good photos, but having firsthand knowledge of where to go, where to anchor was so helpful. 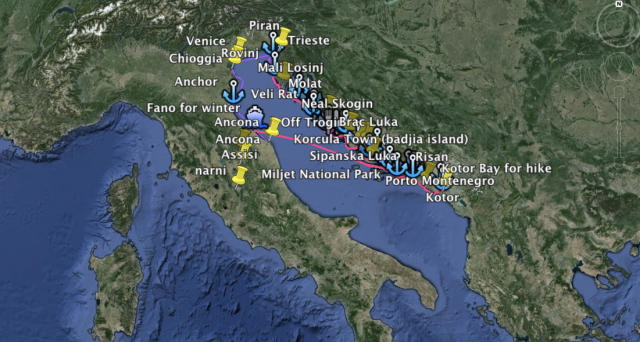