Fano, Italy. Part of the former Roman riveira, packed with nearly forgotten history and a nearly forgotten shipyard. Like our winter home last year, La Ciotat in France, Fano has a long shipyard past that is rather quiet these days. Wally yachts, the outrageously stylish Italian racing sailing yachts that turn heads the world over were built here. Once upon a time. It is now closed down. This yard still makes Amzimut/Ferreti motor yachts of 66 to 80 feet, but otherwise, the facility is hardly being used. We visited earlier in the year to check it out as a winter home. After careful depth sounding (Mauro with a lead line, as we visited by car and went out on someone else’s boat with no depth sounder), we considered it a go.

We managed to pull into Fano in high tide, and only got a little mud swirled on the keel, although we never actually touched bottom. We followed the marina guys, who led us in their tender with an extra tender following us in case a push was necessary, but we made it in by following carefully. So, in spite of depth warnings we made it just fine, and docked right next to the travel lift. The mast was pulled for maintenance and new paint, and Amante was almost out of the water for winter. Not the end of the story, as you can see Amante won’t clear the dock.

The problem with the slot is that it is off center, and too narrow anyway. Stay tuned for attempt #2.

But next day with shorter lifting straps, Amante made it out of the water.

Now she sits proudly blocked at the front of the Marina de Cesare in Fano, where many kind people have stopped to admire her. We love Fano and look forward to returning to Amante here next season. 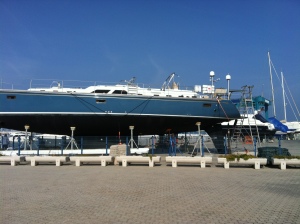