Posted on September 2, 2014 by runsailwrite

Chioggia, Italy
Arrived Sept 1, 2014
Anchored last night in front of a little beach resort town, close enough to hear music blaring until 4 am. yes, 4 a.m. We got up and pulled anchor at 7 to make it to Chioggia before the force 7 wind storm was to hit, about 10 hours motor ride away. Chioggia is a shallow Venice-like town in the very south of Venice Lagoon. We never saw less than 10 feet and the marina seems well protected, so we were much relieved to get here. We went to dinner, which owing to the canals and bridges was a mile’s walk for 300 meter’s distance- as a crow flies. We ate at Gato, a fine fish restaurant, which was very nice, but for the karaoke bar across the street. Why? Why? is this entertainment for some?
Chioggia, they say, is Venice before tourism. 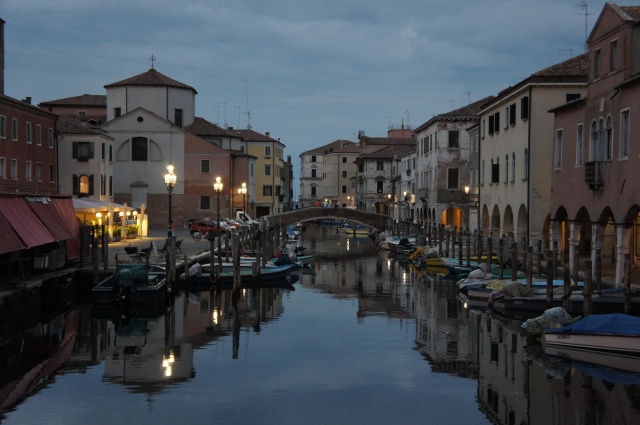 I say Chioggia- the elegant decay of Venice, but just the decay part. Neal thinks it is better preserved than Venice, but both have that sodden, rank fishy air and beautifully crumbling buildings connected by filthy, if quaint canals. It was actually charming, in the smelly sultry way that a town on salt water must be. Dank, rotty, but it is once beautiful architecture that is rotting. 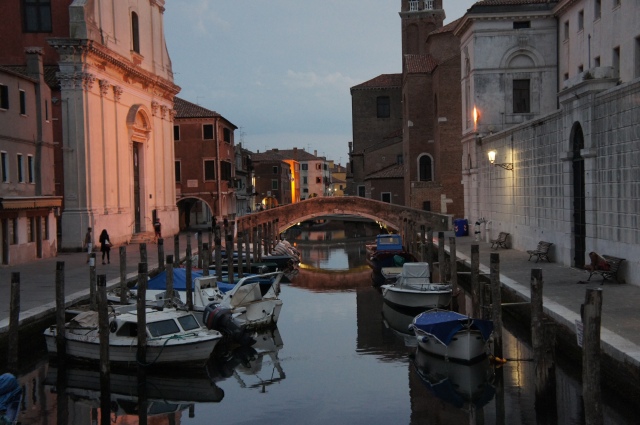 We had many lookers come up and praise Amante’s beauty, which I thought odd so close to Venice with all the big yachts. Locals were preparing for the Bora, adding lines and fenders. One local said “Bora, solo un giorno” (only one day) and another proclaimed Armageddon. We’ll see.

And the Armageddon forecast was spot on, let us pray the “only one day” is also. I heard the wind come up, about 12:30, but all of a sudden, we heeled over towards the dock, the opposite direction the Ormigetiore told us. They had told us there was no need to secure the port bow to the piling, because the wind would be blowing us towards the piling, away from the dock. What a difference 10 degrees makes. Mauro was in the cockpit when I got there, running around adjusting fenders, looking longingly at the piling we needed to be lashed to in order to keep us off the low, concrete dock. The wind grew, wild, screeching howls, clanging and slapping sounds. A dinghy on the pier next to us, which was behind its boat in assumed safety started catching air and smashing back down into the water. I showed Mauro. We looked at that piling, both os us wondering if we could throw a lasso 15-20 feet against a wind that was now gusting to 50. We both attended other things, Mauro adding fenders, me pacing and fretting.

Neal came up. I asked if we should add a stern line and wench the stern in to pull the bow out. He just stood in awe a moment taking it all in calculating what, if anything could be done. He just added, I hope that boat stays put” pointing to the big motor yacht to our port. I hadn’t even thought to get that paranoid. We had moved all the fenders to the dock (starboard) side. (I say we. I mean Mauro. Did I mention how wonderful it is to have a captain again?) Mauro nudged me and pointed to the dinghy we had watched before. It was now upside-down on the pier. The wind was holding 40, with regular gusts to 45, occasional ones to 50. The rain started. I brought up raincoats. Neal and Mauro added a stern line to the port side and used the primary wench to pull the stern in, while Neal thrusted the bow out. It straightened us up a bit, and allowed Neal to put the fenders back down that had thrashed their way out. At about 1:15, just as we had done all we could do, the wind shifted, maybe 5 degrees, so that it was coming head on. This helped a great deal, and soon the wind died down to a reasonable 20 to 25. It had lasted about 40 minutes, and there were 4 of these episodes during the night. Not much sleep.

Next day I provisioned by dinghy and we left for Venice inside the Lagoon.

World traveller, curious observer, quite likely to comment.
View all posts by runsailwrite →
This entry was posted in Uncategorized and tagged Chioggia, Venice Lagoon. Bookmark the permalink.