I ran from Gaios to Mongonissi beach on the southeastern part of Paxos one morning to check it out. The small cove and surrounding bays were adorable and looked very inviting for swimming, so we decided to bring the boat down. 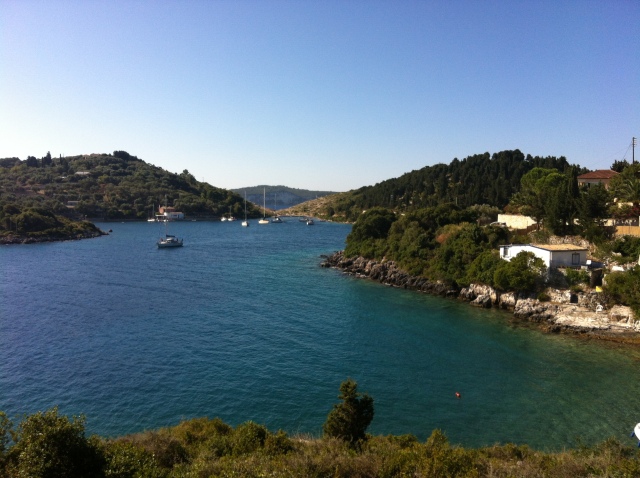 The anchorage was too small for us, so we anchored just outside in the bay that was exposed to the east. This allowed us to use our new stern line anchoring system for the first time, to try the process in good conditions. Mary and Larry can do it by themselves. It involves anchoring the boat and holding it steady on anchor, while someone hops in the dinghy and runs a stern line to the shore, ties it off, while the person holding the boat steady in whatever wind there is, tightens the stern line. Piece of cake with 3 people, all captains, right? First in my defense, I (Vanessa) wanted to anchor without the stern line, so we could just jump in the water and escape the insufferable heat.

It took us 2 hours, mostly due to 3 captains offering ideas. Too many chefs and all that. The 2 main captains, Neal and Mauro had to work out geometry problems on paper before doing anything, one of those captains having to translate both language and units (thus the paper- no one could keep up both in his head), while auxiliary Captainessa just shakes her head and gets hungry and mean. We finally had Amante tied up and anchored and had lunch at 3:00 pm. Here is Amante from shore tucked in against lava rocks.

We didn’t wait the obligatory 30 minutes before jumping in the cool, clear water and had a nice long snorkel. After resting, we went to the little beach resort I had found on a jog the morning before, Mongonissi beach resort with Pan and Theo’s taverna. 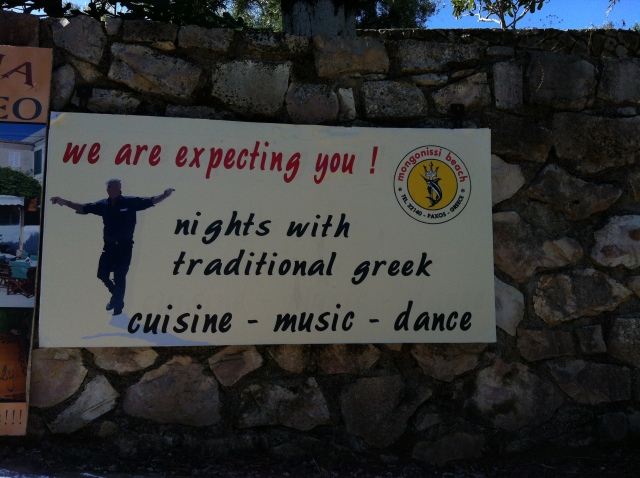 Lovely, peaceful setting with a small beach, and a casually elegant restaurant. The dancing had been the night before, so we missed that, sadly. Our entertainment was provided by 5 small children making the sounds of 5 small children at work on a beach- splashing, squealing, moving sand one fistful at a time for ten minutes to build a sand castle with the right sand, according the the design of the 5 year old architect’s vision. There was only one cat that made the rounds during cocktails, making friends that she would beg her dinner from later. I only gave her 3 pieces of chicken.