Back to La Ciotat!

La Ciotat in spring is a mix of intense wind, intense sunlight, boats and more boats, and at the shipyard, launches. The city is bouncing back from some hard times when the shipyard closed down for military ships. Small boutique boatyards have moved in, and now the biggest of the big Megayachts come here to get hauled with one of the rail/crane systems that were left behind.

One of Larry Ellison’s garish displays of wealth (300 ft? 43 crew? I think) sits in the water, not too far from where little ole Amante sits blocked on the hard. 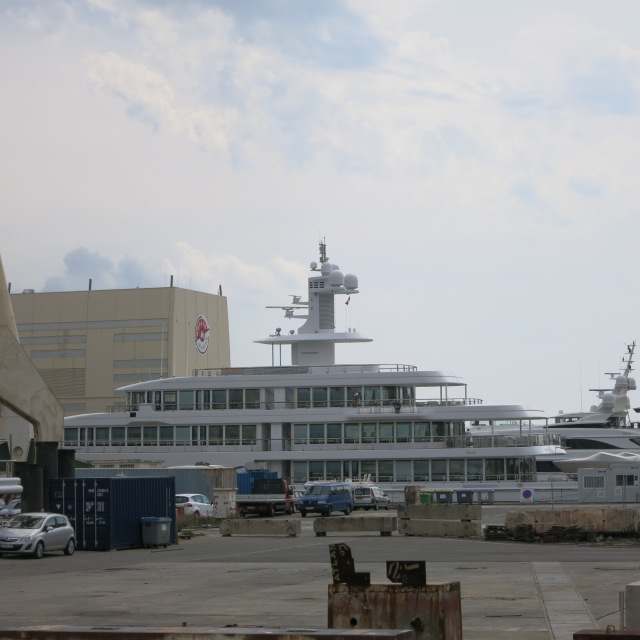 With a thriving restaurant-filled waterfront in the Vieux Port (old port), it is hard to imagine the town has had rough times.
People come here for a day trip, walk along the waterfront and have a long lunch. On Wednesday morning the fishermen come in and sell their catch on the sidewalk. On Sunday there is a large street market with baked goods, cheeses, fresh produce, rotisserie, cured meats, clothes and crafts and in fine weather, people pack the tiny waterfront. A few streets from the waterfront paint a more austere picture. A few streets from the waterfront paint a more austere picture. Buildings are more weather worn, less restored, but a smaller version of the market runs twice weekly near the Lumiere theatre, the first theatre, where the brothers Lumiere invented the moving picture. It is of a train arriving at La Ciotat stain station.

The town is sheltered by a massive rock, Le Bec D’Aigle, and just to the other side of it sits Cassis. From Cassis all the way to Marseilles lie the Calanques, a series of fiord-like inlets, walled high with sheer limestone cliffs and deep dark blue waters.

The Calanques fill up with day trip boats and tour boats and are quite beautiful.
Amante is not ready, so we will tour around a bit while they redo the cabin sole for the 4th time.

La Ciotat has come to feel like our temporary home. Everyone at the Best Western knows our names, Bonjour Madame Franking, greets me several time a day by several employees. They even memorize when we change rooms and just write it down when we enter for breakfast. As we come and go we move to different rooms. This is the view from our favorite.

We have loads of restaurant reviews for anyone interested. And the Best Western is really the best place in town, and quite good for the price and location.