Posted on September 20, 2015 by runsailwrite

We visited Olympia, home of Zeus’s former temple, now home to the archeological restoration project of the same name and UNESCO tourism-attracting heritage site. (I’m becoming suspect of UNESCO’s real mission, but let’s save that for another time). For a place that has revamped the landscape of the whole area to bus in thousands of tourists, the site was pretty average. But here are the cool bits.
It is huge. It is very old.

The temple dedicated to Zeus was monumental, and was near completely destroyed along with most of the entire site, at the command of the conquering Romans.

Augustus stopped destruction because he found the Classical Greek elements quaint, so enough remained to be excavated and restored in the last 30 or so years, or since people have discovered that maintaining antiquities is the certain future economic survival mechanism via the tourist dollar. So to grasp what this meant- that it was built at all during about 1000-2000 is BC with god knows what for tools and labor- is miraculous, but that then someone told a bunch of poor Roman laborers to go tear it down and they managed, is just off the charts improbable. But they did it. Think the Parthenon, just not quite as big, but similar sized columns of hand carved stone, built over a brief period (considering a human had to carve the grooves in the large stone by hand without a laser), then stacked up, topped, etc. all without cranes. It is mind boggling.
Size of these stone segments.

And the temple to Zeus is just the center of Olympia. Remember the word Olympia. If you’re a mythology fan, as I was in grade school and since, you remember that Zeus lived on Olympus, his board of Gods were called the Olympians, etc. I was thinking of this place as that place period. This is what astounds me about my distinct and compartmentalizing shaky intellect. That the Olympic games had anything to do with this, never occurred to me. The Olympic games, a contest of strength and valor were held in honor of the Olympian Zeus every four years from prehistoric times. Between 776 B.C (the first written date and the beginning of recorded Greek history) and 393 A.D, the greek calendar was based on the Olympiad, or the games. They not only included sports, but recitals of verse, and debates, and from 67 B.C, also musical and drama competitions, poetry knockdowns. The modern games revived in 1896 in Athens. The Olympic flame that is carried to wherever in the world is hosting the games is lit here. 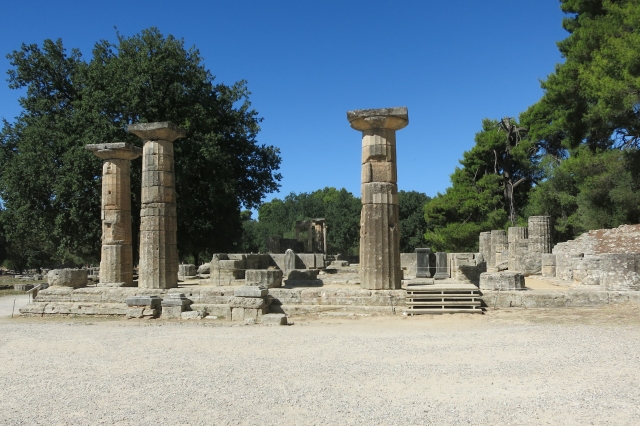 This is the home port of the Olympic Games, all played in tribute to Zeus since pre-recorded history. I never knew this. That the games survived the Christianization of history (when they were originally a pagan festival, not too different from Burning Man, but less filthy) surprises me.

Oh- and did I mention it is huge? The temple is but one building, there are dozens others, and like Zeus’ temple, when I say building, I mean a pile of tumbled stones starting to be cleaned, catalogued and re-stacked, alongside many artists’ renditions of what it likely once looked like.

The museum is where the recovered and restored artifacts live. From 10th century B.C pots and vases and figurines carved in honor of Zeus or Hera, to Roman statues of Marcus Aurelius (one of my favorite authors) or Hermes delivering Dionysus to the nymphs, and a personal favorite, Winged Victory’s first statue- Paeonios’ sculpture from 5th century B.C.

I like to call my Mom, Winged Victory, and she’s only half that age. Hey Mama!

World traveller, curious observer, quite likely to comment.
View all posts by runsailwrite →
This entry was posted in Uncategorized and tagged Olympian Zeus, UNESCO. Bookmark the permalink.

2 Responses to Visit to Olympia