The next Island we visited was Vulcano (Vulcan). Anchoring in Vulcan is rather tricky as the large bay is exceedingly deep, then shallows up to a 25 foot contour line very quickly. 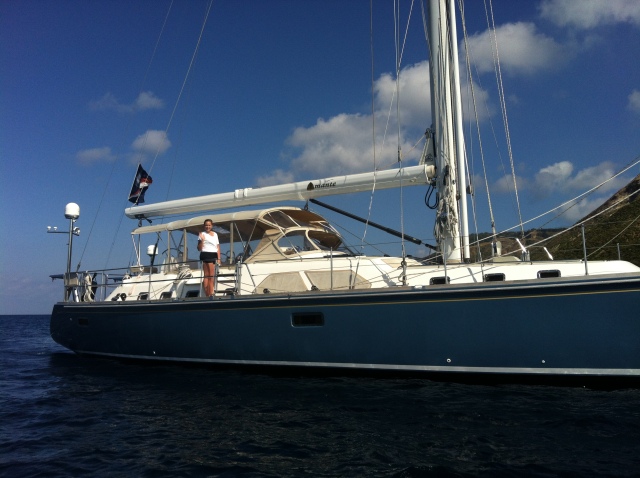 That was full of small boats, so we anchored in about 70 feet of water next to luxury motor yacht with really lovely lines, called “Inception”. We cooked on the grill and we drank the wines we bought in Lipari. We spent the night in ferry wake as this must be the busiest ferry port on the planet (maybe it is a portal to the planet Vulcan, accounting for the 5 Ferries per hour (or so) until 11 pm!! Dreadful. But we got up the next morning with a goal to summit the crater, so off we went.

The town was very small considering the number of Ferries coming and going until very late at night. I do think there is some truth to my theory that this is a portal to the Planet Vulcan, and those aren’t just tourists looking to get stinky in a mud bath, but Vulcans zapping home to Pon Far or something. The architecture seemed Mexican, and after having visited Puerto Vallarta in January, I half expected to see a burrito stand. The houses are almost mission style, with red tile roofs and white stucco walls with exposed wood beams. I suppose there aren’t many trees growing on the island, since it is an active volcano, so materials must be shipped in. But Ihave not seen red tile roofs thus far in the Italian port towns or especially in the islands. So very different from Lipari, which almost touches Volcano at its northern point.

The climb was steep at times, but really pleasant and it felt good to walk the Earth after quite a lot of miles on the boat. 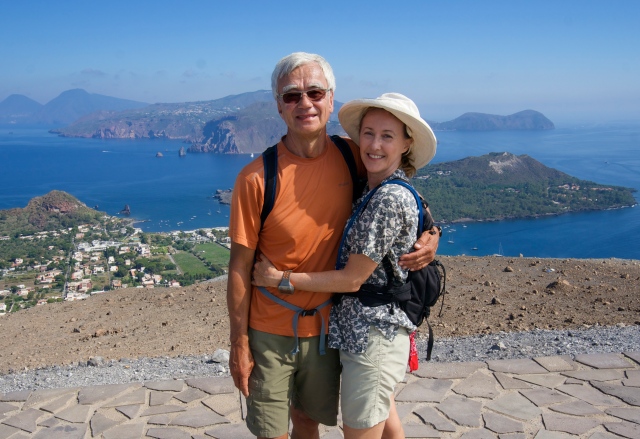 The smell of sulfur was pretty intense. There were delicious views from on top of the crater, but I was really getting tired of the smell of sulphur by this time. It was our plan to finish the hike and go to the bubbling mud pools to “do the mud bath” thing, so off we all went, even Mauro, who seemed to enjoy it the most.

It was foul and disgusting, but we laughed it up and played like it was fun and were happy to take showers afterwards and boil our clothing from the hike and swim. The whole boat is covered in volcanic ash and dust, but we have visited the volcanic Aeolians. One last stop in Sicily, under Etna, and I am done vacuuming volcano ash!