The most beautiful rodeo in the 7 seas.
We arrived in Ponza after an uneventful, mostly windless navigation. Our friend and new sailor, Aaron stood watch for a turn, checking radar, AIS, visual sight checks, engine checks and making hourly log entries. Now Aaron can use the underused phrase, “not on MY watch” with alacrity. We anchored on the town side of Ponza, where all the boats were anchored and went to town. There is a well known lack of dinghy docks in Ponza, in most Italian ports, actually. They have enough visitors, thank you. No fear. Our trusty and very friendly Italian captain Mauro waves over the right guy (he spots the “right guy” from 200 meters) and has a friendly chat, Badaboom, Bob’s your uncle, we have a place on the private dock. Mauro says we can tip the guy if we want. Last year to pick up Perri and Gary we had to “tip” a guy 20 Euros to tie up for 5 minutes in Naxos, near Taormina.
We went to the Ferry office and bought tickets for Mauro to go home for the weekend and for Aaron to go with him back to mainland Italy and continue his aimless wandering, I mean agenda-less travel. I would SO love to be able to travel with what I could carry in a backpack and just go where the weather looks nice, where there is an art or jazz festival I’m interested in, or where new friends claim they have a sailboat and hitch a ride for a few days. What a wonderful way to travel! I’m sure I could find a way to stress it up. We had a nice lunch, a tour of the remarkable cemetery and a dinghy tour of the caves and grottos built by the Romans and still in use today. What monuments to architecture can be built when the price of labor is right. 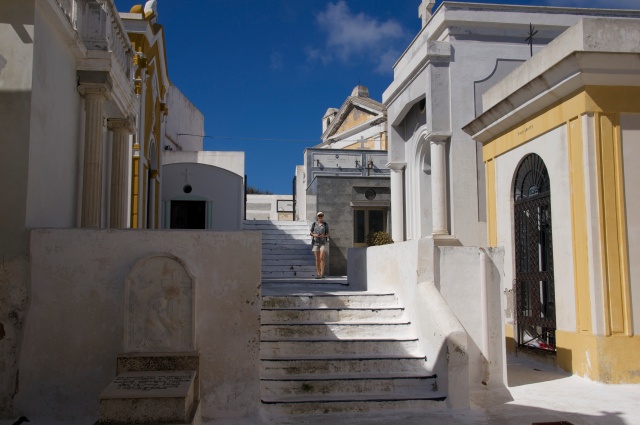 After they left, we, the Franking/Amantes had quiet dinner on the boat, anchored next to some beautiful yachts including Azucar, formerly Crystal Seas, the Younts beautiful yacht on the left. 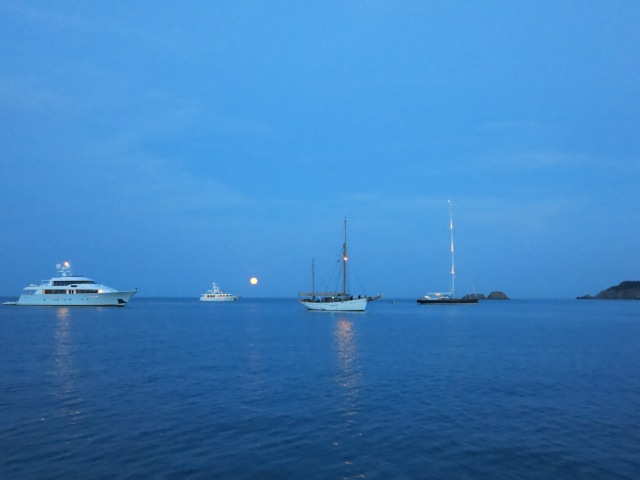 Next day we had a whole day by ourselves doing what I imagine all other boating couples do:
We woke up late from an overnight passage the day/night before. I sat in the cockpit in my underwear writing email. Neal fixed things- imagine! I cleaned like a mad woman. I was actually pretty impressed with myself: bedding for 3 beds, 4 heads, inside of ports, window screens on deck with a scrub brush and oxyclean, new canvas cover for dinghy (I added a shirt for this part), made lunch. I also spent a good hour putting ospho on things that should have been flitzed were I a better person. This is the stainless equivalent of sweeping dust under a rug. Basically cheating. And lastly I cleaned myself, off the back of the boat in just the underwear again. 4 boats pulled up anchor while I did. Just as I was drying my hair to go to town for dinner, a blast of cold air sent me on deck. A squall! Cold air at 25 knots, rush to get all those clean things off the lines (window covers, no laundry) zip up the enclosure and close the hatches.

With that 15 minute squall came the Ponza swell. This is a swell that rolls in from the east striking the anchorage and amplifying at the 25 foot contour mark that small boats choose to anchor on. So they (and us) get it from both directions- the swell rolls in, hits the shore and bounces back in to a big piled up mess. Boats started leaving to go to the other side, what everyone does when this happens, what we did last year only after a couple of hours of torture. Mr Franking reported that the weather forecast shows the other side of the island would be worse. So we had sandwiches for dinner, our plans to go into town, dashed. I went up front to try to sleep. The swell grew worse. Mr Franking said he had dove down with the mask and snorkel and saw the anchor buried deep in the mud. He felt secure, he pointed to all the boats that had stayed (all over 100 feet). I tried to sleep on the salon sofa- nothing like this is every encountered at sea, the period of the waves was a few feet- constant pitching, 6-8 feet, some of the waves breaking before they hit us, the dinghy was tied to the tow line out back going airborne. I said very mean things to Mr Franking about why are we the last to move and he sat there sure the other side was worse and couldn’t explain why they weren’t returning. Next morning, the 80 meter left with its guests and we were alone, all alone in the anchorage with our smug certainty of the weather forecast to keep us awake. We left for the other side about 10.

We found a spot in the quite lovely Cala di Feola. There weren’t many boats but there were many Ponzans, as this is a waterfront hangout. There aren’t beaches, but beautiful rocky shoreline, caves, limestone baths used by the Romans that are separated from the shoreline by a narrow isthmus of limestone used as a beach. We walked up about 10 million stairs that snaked through people’s homes, between their house and garden, between neighbors chatting from their respective patios. This island, outside Ponza town, has houses that I think look more Greek than Italian, flat and white, roofs used as rain catchment, often with PVC leading across the walking path to a garden trough. Exhausted and slightly land sick from the bronco busting the night before, I lagged behind Neal towards the town, where the church bells reminded me it was Sunday. A man stopped us at the bus stop, a very friendly Ponzan who wanted to know where we were from. We told him Nevada. He said, “Cherokee? Navaho?” I was dumbstruck. I knew these words. I couldn’t attach them to anything a man in Ponza should be asking me. He said, “I lika the Indiani.” (Italian plural word for Indians). I was so dumbstruck I couldn’t remember the Indian tribe that settled the Tahoe basin. I guessed “Arapahoe?” I knew it was wrong, but how do you tell a guy in Ponza he knows more about the native peoples of your home town than you do? He seemed pleased and bid us a buon giornata and caught the bus with his vegetables.

We walked around a bit and shopped and had lunch at the only hotel we saw. Our carafe of not bad wine was 3 euros. Meal was pretty good.We thought we might have a full night sleep, but about bedtime, all the boats looking for a safe anchorage from the other side showed up and fought for the few remaining spots in the harbor, in about 20-25 knots of wind. It was such a circus that Neal stayed in the cockpit waiting with fenders until things and boats quieted down, about 2 a.m.
We had to get Mauro from the Ferry dock the next morning, so around we went. The swell was still rolling, from a few weather events that converged on tiny little middle of the Tyhrean sea Ponza. We tried to anchor where we had spent the night two days previously, but couldn’t get the anchor to hold. So Neal stayed on deck while I took the dinghy to get Mauro. Wearing the life vest in the dinghy wasn’t a bad idea, but it was simply forgotten. I had been wearing it around the island over my rain jacket. Returning from the market in my life vest, Mauro reminded me how silly I looked and took my photo. All I’m missing is my bike helmet and safety goggles.

And in this condition, tired and unsteady, we left for the 29 hour crossing to Stromboli. Bad bad idea, but staying would have been worse as the weather continued to pick on poor little Ponza. I love this beautiful island, but one has to want to visit to warrant the trouble of doing so. And one must be prepared to sleep in one’s life vest.